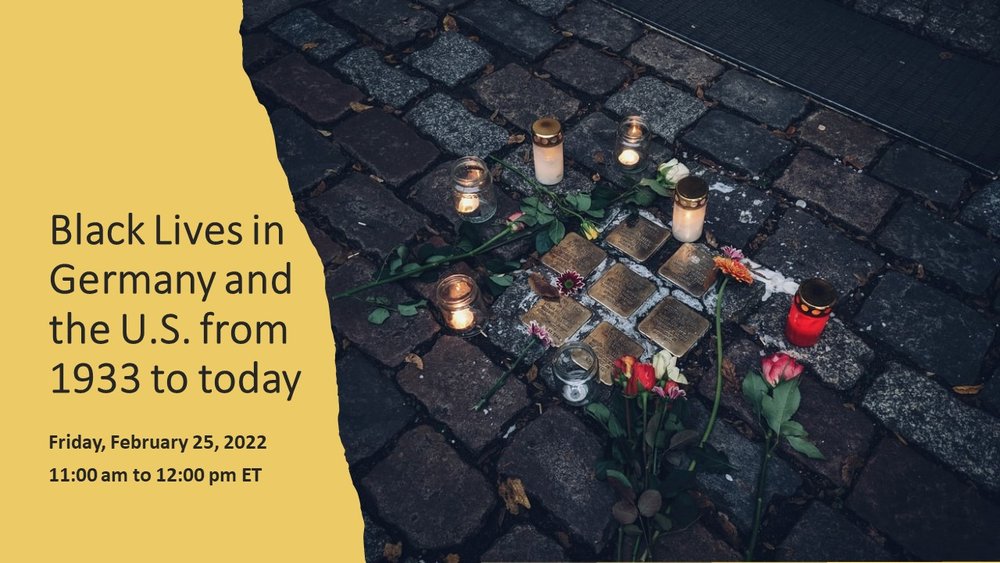 In 2021, two Black victims of the Nazi regime were finally honored with so-called STOLPERSTEINE — (lit. “stumbling stones or blocks”) – pioneered by German artist Gunter Demnig in Berlin. With concrete cubes bearing the names of persecuted residents in front of their homes, victims are being remembered in Berlin and other German cities.

What was life like as a Black woman or man in Nazi Germany? Why did it take more than 75 years to honor Black victims of the Nazi regime? What are the many forms of racism in today’s Western societies, triggering a renewed global Black Lives Matter movement in 2020?

Please join us at 5:00 PM CET for a virtual conversation with Prof. Robbie Aitken, historian of Black Europe, Sheffield Hallam University, who led the effort to place the Stolpersteine for Martha Ndumbe and Ferdinand James Allen; Dr. Tiffany Florvil, Associate Professor of 20th Century European Women’s and Gender History at the University of New Mexico; and Ms. Alice Hasters, journalist, blogger, and author who identifies as a Black German and publishes about her experience in today’s society. Moderated by Dr. Nicholas Boston, sociologist and Associate Professor in the Department of Journalism and Media Studies at the City University of New York, Lehman College.

This event is presented by 1014, the American Council on Germany, the German General Consulate New York, the School of Arts and Humanities, Lehman College (CUNY), the Goethe Institut Los Angeles, Deutsches Haus at New York University, The Belle Zeller Scholarship Fund, the German Fulbright Alumni Association, The Women’s Foreign Policy Group, The CUNY Academy for the Humanities and Sciences and the US Fulbright Association.